This place is so dead

‘It’s a fast-acting virus that left you with a swollen brain, a raging fever that made you hateful, violent and gave you a really, really bad case of the munchies.’ – Zombieland is the most successful zombie-comedy released since Shaun of the Dead and is told through the eyes of an unlikely hero known only as Columbus (played by Jesse Eisenberg), a lonely young college student who is one of the few remaining survivors of the zombie apocalypse – the cause of the outbreak is established as being the consumption of a contaminated burger at a Gas N’ Gulp. Columbus was able to survive the undead epidemic by following his list of survival rules including ‘The Double Tap’, ‘Beware of Bathrooms’ and ‘Check the Back Seat’. All his life, Columbus had avoided human contact like the plague and he sees this as an advantage when living in a zombie-infested world but all that’s about to change when he crosses paths with a gun-wielding, fearless, zombie killing-machine known as Tallahassee (Woody Harrelson) who is on a tireless search for Twinkies… 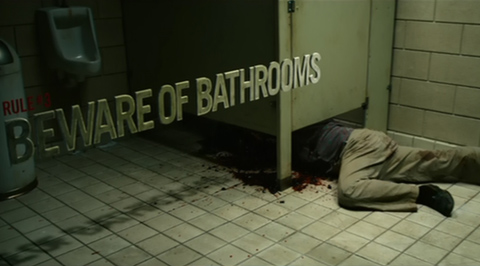 At the beginning of the film, Columbus introduces us to a post-apocalyptic world overrun by the flesh-eating undead who are capable of sprinting after their prey at an alarming rate. After an impressive opening sequence, we see the fearful student on a perilous journey from Austin, Texas to Columbus, Ohio, in the hope of finding his parents alive and well. On the way, he meets Tallahassee who offers to give him a lift as far as Texarkana. The mismatched pair stop when they come across an deserted Hostess truck which, to Tallahassee’s dismay, is filled with Sno Balls rather than Twinkies.

The dynamic duo continue on their journey until they find a grocery store. Determined to get his cream-filled golden sponge cake, Tallahassee grabs some weapons form the back of his car and enters the store with Columbus. Once inside, Tallahassee plays a banjo to alert any zombies lurking within the store. Without any hesitation, he takes out the approaching zombies using a variety of weapons as Columbus looks on with admiration. At the back of the store, they encounter a distressed young woman, later referred to as Wichita (Emma Stone) who reveals that her younger sister, Little Rock (Abigail Breslin) has been bitten and asks to borrow their gun to take her out of her misery. Reluctantly, Tallahassee gives Wichita the gun only to have it turned back on him and Columbus. The sisters had outwitted the pair and steal their vehicle, leaving the men no option but to proceed on foot.

After a while, Tallahassee and Columbus are lucky enough to find an abandoned Hummer full of guns (to which Tallahassee exclaims ‘Thank God for rednecks!’) and set off. Before long they spot their stolen car empty on the side of the road with the word ’Help’ painted on its side. Suspecting a trap, Tallahassee heads over to check out his car on foot while instructing Columbus to wait in the Hummer for his signal. Despite their caution, the pair are fooled by the two sisters again and are taken hostage in their latest vehicle. As Tallahassee and the girls continue to hold each other at gunpoint, Columbus insists that they stop and reminds the group that they have bigger problems than each other at the moment. When asked where they are headed, Little Rock informs the group that she and her sister are on the way to an amusement park they used to visit as kids called Pacific Playland which is apparently zombie-free. Columbus is then saddened to hear from Wichita that Columbus is now a ghost town and completely burned to the ground. Now, having no family left and no home to return to, Columbus decides to stick with his new acquaintances.

Hours pass and the newly-formed group of survivors stop off at an Indian-themed gift shop and completely trash the place, in order to let off a little steam, then continue on their way. Eventually, they reach Los Angeles which is now virtually derelict. As they drive through the ruined streets, Columbus suggests that they find somewhere to rest so Tallahassee briefly stops the car so others can get out and grab a map to the Hollywood movie stars’ homes, avoiding the undead in the process. Having successfully secured a map, Tallahassee insists they stay at the very best and takes the group to the mansion of none other than Bill Murray (who stars as himself). When they arrive, the place seems deserted and the group pair-off to search the building for any potential threat. Columbus and Little Rock come across a home movie theatre where Columbus decides to teach Little Rock, who had surprisingly never heard of Murray until now, all about the comedy legend by showing her Ghostbusters.

Meanwhile, Tallahassee and Wichita check out the rest of the mansion. Wichita plays golf indoors while Tallahassee dances to the Ghostbusters theme tune when Wichita accidently hits Tallahassee with a golf ball. Tallahassee slowly gets back up on his feet, only to come face to face with a decomposing Bill Murray standing before him. Wichita instinctively strikes Murray with a golf club and when he yelps in pain, they realise he isn’t an actual zombie – he later explains that he dresses as a zombie in order to blend in as zombies don’t mess with other zombies. Being a huge fan of Murray, Tallahassee has a little star-struck episode and gets to re-inact his favourite scenes from Ghostbusters with Murray and Wichita. However, things take a downward turn when a practical joke goes terribly wrong – the three had decided to play a trick on Columbus over in the movie theatre by getting the ’zombified’ Murray to sneak up on him. When he does so, Columbus shoots Murray dead, to the complete shock of the group – Columbus is mortified when he realises what he has done. Mournfully, the group wrap up Murray’s corpse, toss him over the side of the building and give him a shotgun salute. That evening, the remaining survivors settle down for a game of Monopoly and discuss the worst and best things about living in Zombieland. It is at this point that Tallahassee reveals that he had in fact lost his young son during the zombie outbreak. 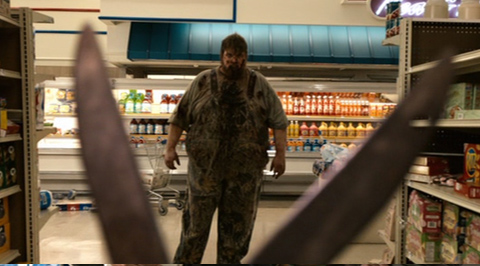 Days pass and the group continue to bond and get to know one another. Tallahassee teaches Little Rock how to shoot and it becomes apparent that there is a relationship forming between Wichita and Columbus. An intimate moment between the pair is interrupted when Tallahassee walks in and asks them to help himself and Little Rock build a fort. Wichita and Little Rock had always believed that during this ordeal they only needed each other to survive and they should trust no one else so, fearing any potential attachment with Columbus, Wichita decides to leave with her sister in the early hours of the following morning and make their way to Pacific Playland. As the sisters head for their destination, Columbus is left feeling completely alone and broken-hearted.

When the girls arrive at the amusement park, the place seems to be empty and Wichita powers up the rides, happy to give her younger sister the chance to act like a kid once again. Unfortunately, by lighting up the park, they had successfully attracted the attention of dozens of zombies in the surrounding area. Together, they manage to trap themselves on a ride to temporarily avoid getting eaten by the ravenous undead mob. Lucky for them, Columbus decides to go after Wichita and Tallahassee reluctantly agrees to accompany him.

When the men arrive at Pacific Playland, Columbus makes his way over to the ladies in distress while Tallahassee attracts the attention of the undead crowd with a sound horn and does what he does best, single-handedly slaying multitudes of the infected in an impressive display. With several zombies hot on his heels, Columbus travels through a haunted house ride and finally reaches the trapped Wichita and Little Rock but, in order to rescue them, he must overcome a combination of his worst fears (of which there are many)- a particularly nasty clown zombie. He successfully eradicates the clown with a ’Test Your Strength’ hammer. Columbus then saves the girls and Wichita puts her arms around him and tells him her real name, which is Krista, and the couple share their first kiss.

Next, they search for Tallahassee who is frantically searching the snack stalls for his beloved Twinkies. Columbus joins him and is startled by a noise and shoots in the direction of the sound. In an unlucky move, Columbus had accidently shot the only box of Twinkies in the park. At this, Tallahassee is too angry for words and heads back outside. Columbus follows him out and sees Wichita and Little Rock waiting for them in the car. Little Rock throws an intact Twinkie to Tallahassee and Columbus realises that he is finally part of a real family. Columbus and Tallahassee climb onboard and the group drive away.

I first went to see this film at the cinema not knowing what to expect, having heard little about it beforehand, but I was pleasantly surprised with what I saw. Zombieland was an outstanding cinematic experience and I highly recommend it – the opening scene is fantastic, it has a great soundtrack, it’s ‘survival guide’ style is fresh and original and it was very funny. Plus, Bill Murray’s cameo was the icing on the cake. It even has a clown zombie.